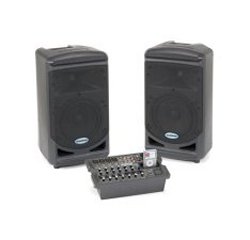 Samson has just released the Expedition XP308i, a portable 8-channel mixer that comes with a built-in iPod dock and dual two-way speakers. It packs a 300-watt power amplifier inside, along with 8″ woofers in 2-way vented enclosures, and a couple of internal 150W Class D amplifiers.

It was specially designed to not weigh a ton and make it easy to carry around. You’ll also get four mic/line inputs, two stereo inputs, and the ability to control the bass and treble. The Expedition XP308i will be available in June for $680.