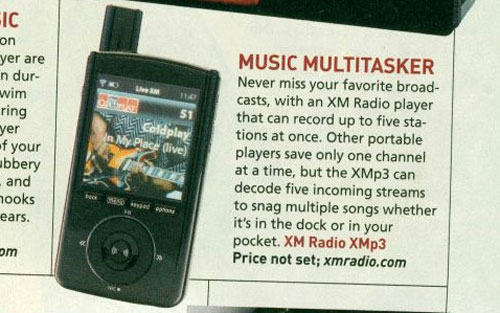 XM’s XMp3 portable radio has been leaked along with one of its key features, thanks to a new Popular Science issue that accidentally revealed the device before showtime. The size has been reduced compared to the the Pioneer Inno and other previous handheld satellite radios, but the big news so far is that the XMp3 has the option of capturing five separate channels and downloading a song from each at the same time. The user could listen to a live event without missing broadcasts on other stations. Details are scarce, but we know it has a color display of unknown resolution and a dock. We’re guessing it also sports typical mp3 storage as well. No pricing info yet or launch date, but expect it by year’s end.