Posted in Denon,Dock,iPod Accessories,Wi-Fi by Darrin Olson on July 25th, 2007 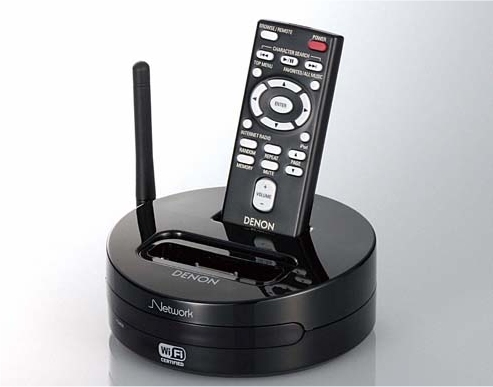 Denon has been coming out with a number of products lately with one of the cooler ones being this WiFi iPod dock. The small round docking station connects to your home theater components via RCA and S-Video to let you stream music and pictures to them wirelessly from your PC, or from the iPod that’s docked in it.

Controlling the device is done through an included remote control and can be visually navigated on-screen through your connected television, which will also show information on the current track playing and can control your iPod when docked. The dock is compatible with any 3rd generation iPod on up including iPod video, iPod Nano and iPod Mini and will also charge the devices when connected.

The WiFi iPod dock is available in colors of gloss white or black and will be available in September for $229.99