Posted in Home Theater by Shane McGlaun on January 7th, 2010 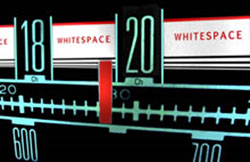 TV stations that broadcast on airwaves today each have what’s called whitespace between them. The whitespace is there to keep each broadcast from interfering with the ones next to it. There has been lots of talk about using this whitespace for other uses.

A company called Cambridge Consultants has unveiled a new radio at CES that can use the whitespace to stream HD video and other material around a home. The radio can operate on normal 2.4GHz and 5GHz WiFi bands and can also operate on the 600Mhz whitespace band between stations.