Posted in Lenovo by Conner Flynn on January 22nd, 2009

Some of you might consider this NSFW, even though it isn’t really. There’s no nudity. Here’s the synopsis: Some creepy guy at the office is telling a story about the office hottie and his Lenovo W700ds. He starts bragging about one of it’s features. Next thing you know they’re playing strip poker. In this case, she strips everytime the w700ds beats her laptop. Then it’s time to brag about his second screen and she strips all the way. It all ends with a joke about how big it is and a “That’s what she said” joke.

CNET thinks this came from inside Lenovo, but who knows. It’s stupid yes, and dorky. But also genius as marketing. Sadly in the real world, women aren’t that impressed with laptop specs. Unless I’ve been hanfing with the wrong women. 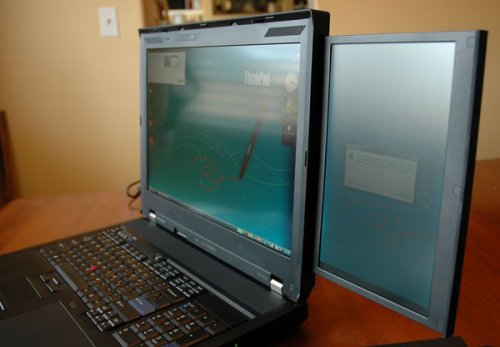 Lenovo’s ThinkPad W700ds is pretty damn intriguing. We want one. Sadly every gadget under our tree had just a single screen. So we were happy to learn that GottaBeMobile got their gadget-loving hands on one. They were nice enough to share their knowledge of the twin screened beast.

Dual screens on a laptop. Oh yes. We’ve been drooling over Lenovo’s W700ds, and now we have the laptop’s first widely available video. The unit in the video appears to be that of a pre-production model.

Another thing that you might have noticed is the wobble in that pull-out panel. Yikes, that thing looks fragile. It looks like it didn’t go back in too easy either. But we’re hoping Lenovo works out all it’s issues before it hits the market for real. I have no doubt that they will as they have a lot riding on this unit. 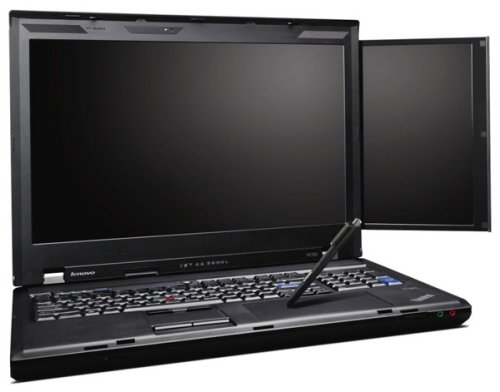 We told you about this dual-screened ThinkPad a few days ago, but now more details have come to light. The W700ds comes with your choice of Intel Core 2 Quad processors and is combined with the NVIDIA Quadro FX 3700M GPU. RAM maxes out at 8GB and SSD / HDD storage maxes out at 960GB.

The primary 17-inch screen is supposed to be the brightest on the market, and if that’s not drool-worthy enough, it sports an integrated WACOM digitizer. The 11 pound laptop starts at $3,600, so you’d better start saving your money for January it ships.