Posted in Concepts by Conner Flynn on September 14th, 2008 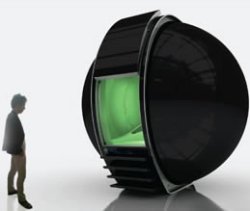 When it comes right down to it, entertainment is all about the sensory experience. It’s about feeling like we are there, even if we aren’t. The Wii has probably come the closest, but like other consoles, it leaves alot to be desired as far as fully immersing users. The Cocoon is a new VR system developed by NAU, which is a human-sized pod that you enter and it’s actually designed with videogames in mind.

The immersion and interactivity will take it light years beyond the Wii. It includes full 3D surround sound, and graphics as well as Internet connectivity, and could be the ultimate gaming environment to challenge friends from around the world. It may not show up in the home anytime soon, but when it does one future day, everything will change. Game graphics and audio are ready for it right now, but it’s the interactivity, interface, and total immersion that will set it apart. Most of Nintendo’s competitor’s were caught off guard with the Wii, but you can bet they are taking some serious looks at this future technology.