Posted in Automotive by Conner Flynn on August 5th, 2008 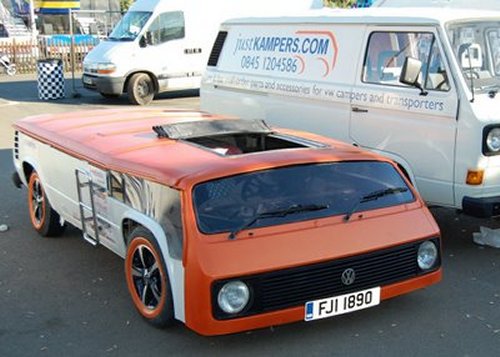 Does this qualify as a Lowrider? I have no idea. It’s claimed that the Vancake is the lowest Volkswagen Bus in the world. Tiny hippies use it to go back and forth between Burning Man and Middle Earth. It measures only 3 feet tall and was originally a VW Camper.

Apparently it manages to be street legal. Designers Just Kampers and Andy Saunders created the Vancake in just three days. They did all the work during the Bug Jam festival at the UK’s Santa Pod Raceway from June 18 to June 20, which consisted of removing the Volkswagen’s roof, putting in an electric sunroof, and completely redoing the paint job. It may be street legal, but it’s just plain wrong.