Posted in Automotive by Conner Flynn on September 24th, 2008 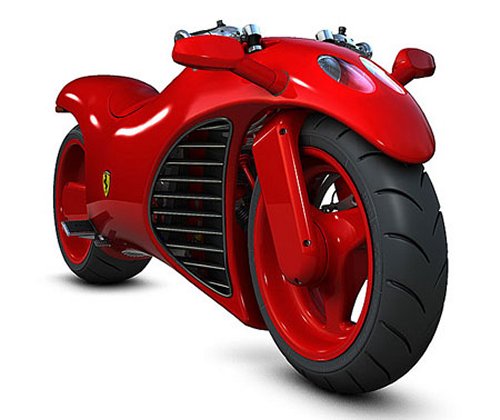 Something just had sex with my eyes and it’s the Ferrari V4 Superbike concept, but instead of having a smoke and cuddling I made a lame excuse and left so I could tell you all about it. This has to be the absolute best attempt at a Ferrari motorcycle. The concept is the work of Israeli designer Amir Glinik, who based his design around the theoretical application of the Ferrari Enzo’s V12 engine, chopped down to four cylinders and modified to drive just one wheel in a motorcycle.

Glinik’s design has a sleek shape that is futuristic, but thoroughly ridable and it catches your attention like a long-legged blonde in a room full of Ugly Bettys. Glinik even planned out the controls, blending elements from an F-16 fighter jet and the high-tech Formula One steering wheel. It even sports a weatherproof touch-screen LCD on the fuel tank. This is one that I think anybody would want to see built.