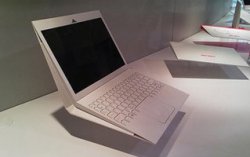 Asus’s Fold/Unfold concept that they showed off at CES is actually going to be released, according to Asus CEO Jerry Shen. The notebook will cost somewhere between $1,000 and $1,500. The Fold/Unfold (Lets hope it gets a better name) should arrive around September or October 2009.

The design maximizes space for the keyboard and trackpad by sliding the keyboard forward over the trackpad when the laptop’s closed, and sliding back to reveal it when open. It’s an interesting development given the size limitations of netbooks while wanting to maximize keyboard space.