I am a big fan of Rock Band and the last track pack I bought was for some friends that like country music. The only downside to the Country Track Pack was that it was over very quickly. If country isn’t your thing, a new metal track pack is coming soon for Rock Band.

EA, Harmonix, and MTV Games have announced that a Metal Track Pack is coming on October 13 for Rock Band and Rock Band 2. The track pack offers 20 tracks and six of them are new to the platform. That means the majority of the songs are not new so you will want to be sure you don’t already own some of them before you buy. The pack will sell for $29.99.

The new Country Track Pack is now available in America and can be purchased in retail locations for $29.99. The track pack has 21 country tracks from artists like Willie Nelson, Alan Jackson, Kenny Rogers, Kenny Chesney, Jason Aldean and Shania Twain. 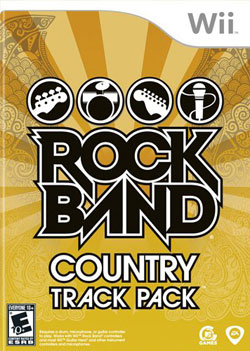 Yee-haw and giddy up little doggies. Harmonix has announced that they will be releasing a new song update for their Rock Band game. The Rock Band Country Track Pack features 21 brand new songs to rock out to.

This new “Track Pack” will be available for all the major consoles like the PlayStation 2, PlayStation 3, Xbox 360 and the Wii. It features hits from numerous country artists including Shania Twain and more. Now I don’t know much about Country music and I’m not a fan, but I can only imagine that your screen will be filled with things like tractors, horses and perhaps Willie Nelson riding both. You can get this song update starting on July 21 for $29.99. The complete track listing below.

Rock Band is one of the most popular games available on the Xbox, PS3, and Wii. The game lets average game geeks and music fans live the life of a virtual rock star and even if you don’t like playing the game, it’s great fun to watch your friends make fools of themselves trying to sing, play guitar, and drum.

If you think about the early 1990’s music scene one of the most popular genres was Grunge and one of the biggest bands in the Grunge movement was Pearl Jam. The band’s debut album launched on August 27, 1991 and went on to sell 12 million copies.

The band and Harmonix announced today that along with the reissue of the debut album called Ten from Pearl Jam, the entire album would be coming to Rock Band as download content. The reissued album and Rock Band track pack will be available starting on March 24, 2009.