Posted in Accessories by Darrin Olson on February 13th, 2008 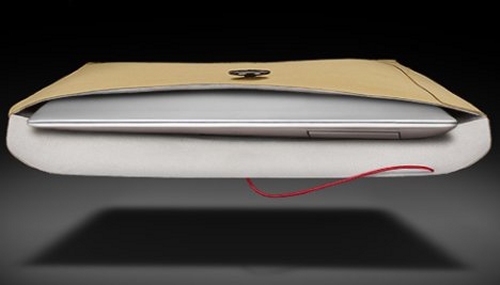 Taking a queue from the marketing folks for Apple’s new MacBook Air, Timbuk2 has announced the Steve Sleeve. The thin case designed specifically for the notebook resembles the manila envelope that Apple uses in their commercials and that Steve Jobs used to originally present the Macbook Air.

Timbuk2 assures us that when the Steve Sleeve actually starts shipping in March we’ll find that it’s much tougher than a standard manila enveloper, however. It has a soft low-pile fleece lining (from recycle-ready poly no less), an exterior made from the same stuff as mountaineering jackets, ultrasonic welds on the seems and brushed (recyclable) aluminum buttons.