Posted in JVC by Conner Flynn on January 8th, 2011 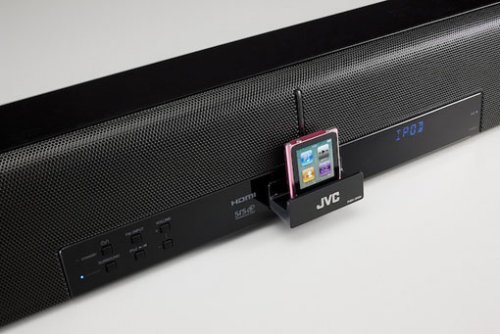 JVC’s TH-BC3 and TH-BC1 soundbars look pretty sweet. They use SRS StudioSound HD which processes up to 6.1 channels for playback over two speakers or headphones. The entry-level JVC TH-BC1 is a 60-watt (30 watts per channel) two-channel SRS StudioSound HD front surround soundbar that features a built-in FM tuner, an analog input and two digital audio inputs, and a subwoofer pre-out.

The high-end JVC TH-BC3 has a push-open dock for your iPod and iPhone, an HDMI 1.4 port, 3D Video ready pass through, ARC (Audio Return Channel), an FM tuner and a video output for iPod and iPhone. So how much do they cost? The JVC TH-BC1 will be available in January for $149.95, while the JVC TH-BC3 will be released in February for $249.95.