Posted in Concepts by Conner Flynn on September 1st, 2008 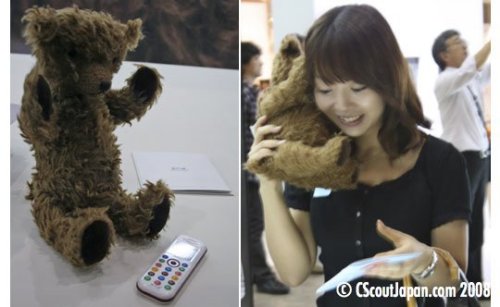 Making it’s debut at the 2008 Good Design Expo,(That’s debatable) cellular provider Willcom’s Kuma Phone let’s you talk to a bears nuts while you apparently listen to the voice come out of it’s mouth. Just plain looks wrong and takes the human/bear relationship to places it should never go. It’s totally a real phone. Just one you wouldn’t want to use in public.

It has a SIM card inside just like a real cell phone, and even stores four speed dial numbers, accessed through paw-squeezes. Awww. It vibrates and makes noises when you have incoming calls. When you get a call, just answer by gripping the bear’s tail and end the call in the same way. The Kuma Phone hopes to see the light of day at $500 a unit. I’m not sure how I feel about it. On one hand we’re talking a $500 cuddly bear phone. Which is insane of course. On the other hand, I wouldn’t want to deny any bear it’s obvious pleasure interacting with a lovely Asian girl. 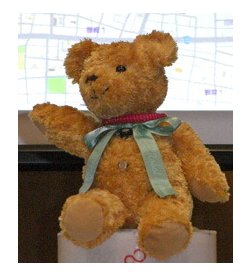 Looks like the Teddy bear from AI has now come to life. Only problem is, he loves GPS and won’t shut up about it. I guess the idea is to put some Snuggles fabric softener-like cuddliness into a gadget, thereby making it more personal. Which is great and all, if I’m not worried that it will come to life, gain a soul and kill me, then use my corpse as armor while it kills others.

This cuddly but potentially deadly creature was created by iXs Research Corporation and is hopefully not the future of GPS navigation. It will talk and give you the directions you need. It’s arms even point you in the right direction. Get this. It has an alcohol detection sensor in its neck, so it will give you an attitude about driving drunk. Not flying out the window and hitting a puddle, it won’t!