Posted in Netflix by Conner Flynn on November 22nd, 2010 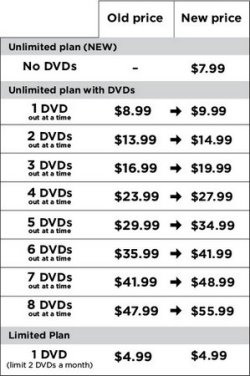 The streaming-only plan for Netflix unofficially rolled out last month is now being officially launched. The company opted to go with the $7.99 price, which helps it compete against Hulu Plus. However, at the same time the prices for all unlimited plans that include DVDs have jumped by at least one dollar.

So now you’ll be paying $9.99 for a one DVD at a time plan. So, it’s a cheaper option for those of us who have moved beyond physical media. Anyone going to try this new option, or are you sticking with DVDs?