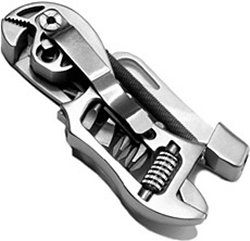 The Spyderco Byrdwrench has an odd name. It’s not a wrench made by spiders for birds who spell their name with a Y like the British rock band. That would just be silly. What it is, is a multi-tool that’s a bit different from some other multi-tools. It sports a combination of one-hand open knife, slip-joint pliers, bit driver, and an adjustable crescent wrench.

It’s also got a rough punch file/hole-starter and a steel belt clip, and can be separated into two halves to reveal the four screwdriver bits inside. While I’m sure it’s convenient and it does have an interesting sort of industrial look, I’m not really sold on the idea that it’s somehow better then my trusty Leatherman multi-tool. The price is about the same at $77. If anyone has one, let me know how you like it.