Posted in Automotive by Conner Flynn on November 8th, 2009 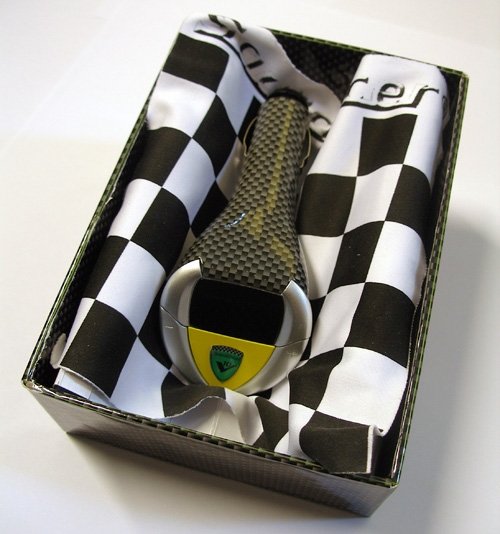 So you drive around in an Gremlin, but what you really want is a Porsche or a Ferrari. Unfortunately you can’t afford one. Which is why you are in your little bucket of rust. Well, the Soundracer can help. It won’t convert your heap into a sportier car, but it will plug into your car’s cigarette lighter port, and use an FM transmitter to play real V8 or V10 engine sound effects to the stereo.

That way you can at least pretend you are driving in luxury. According to SoundRacer’s website, the sounds correspond to the RPMs of your car’s engine. Pretend is fun. 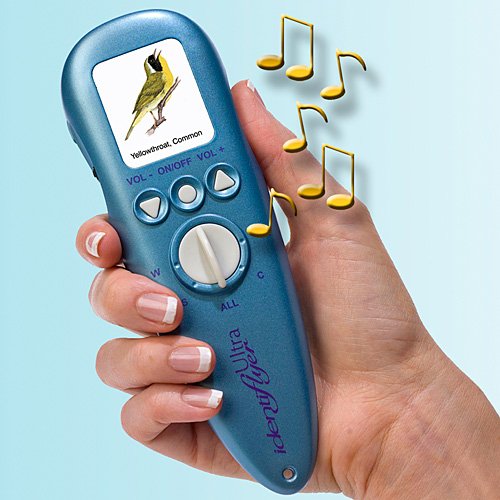 Most humans out there who really love birds probably have some bird related knowledge and can identify birds by their songs. But maybe you are a novice bird enthusiast who hasn’t yet learned to identify them by sound. Well, the Bird Identiflyer can help.

The Bird Identiflyer can quickly identify bird songs with just the press of a button. It will help you to identify 120 birds and even 10 frogs by their songs and colors. You can search by region, color, habitat or alphabetically. Select the bird, then press a button to hear its song. 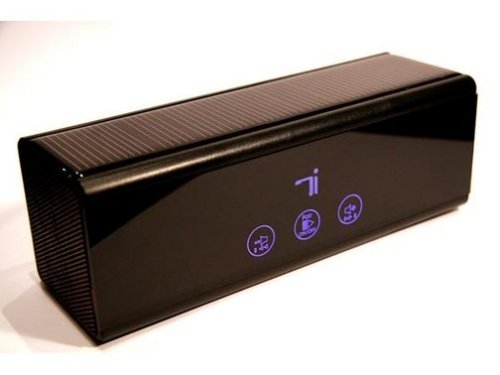 If you enjoy carrying your speakers around with you, check out these Devotec Solar Sound Bluetooth Speakers. They come with a pair of 2W drivers, Bluetooth and AVRCP support, along with a 3.5mm jack and a 1,500mAh battery that should provide up to 8 hours on a single charge.

Don’t worry, you won’t be a complete slave to the sun. If you choose not to invest the 12 to 24 hours it will take to charge via solar, you can power it up via USB for 4 hours or so. 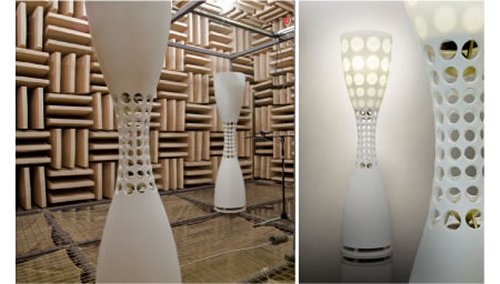 We don’t know much else because it’s still in the development stages. We feel pretty confident it won’t be cheap. Making things look like Wiffle balls is an expensive business. I applaud their creative genius and their willingness to venture into such uncharted territory.

MWC is almost here and the leaked images have started arriving. Meet the Samsung M700 which sort of resembles the Helio. This candybar phone features a 2.8-inch AMOLED touchscreen display, Bang and Olufsen amplifier, GPS and a 3 Megapixel camera.

You’ll also get a DJ scratching application that will let you add effects and even record, so you can be the man at parties. The phone could be available as soon as May of this year. We should know more when MWC kicks off. 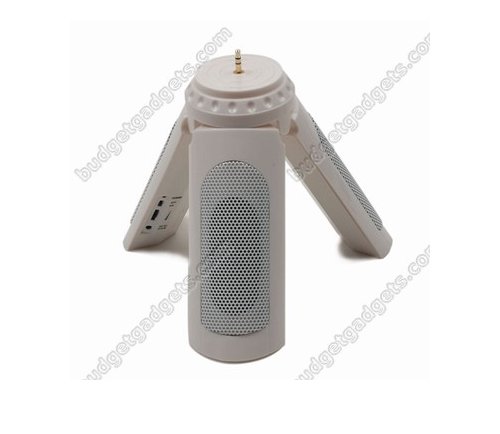 We’ve covered our share of cheap crap gadgets ’round these parts, but sometimes what looks like a cheap gadget can surprise you. Like this Tripod MP3 speaker for instance. Yeah, iPod/MP3 speakers are a dime a dozen, but they aren’t all created equal. I picked up one of these Tripod speakers because although my laptop has great sound, it could be louder, so I figured I would take a chance on this one.

The design is cool because it pumps the music in three directions. And as far as loudness, it doesn’t disappoint. In fact, it’s surprisingly loud and I haven’t had any sound problems at all, like crackling etc. Just attach your MP3 player via the headphone jack, plug it into your USB port and you’re good to go. 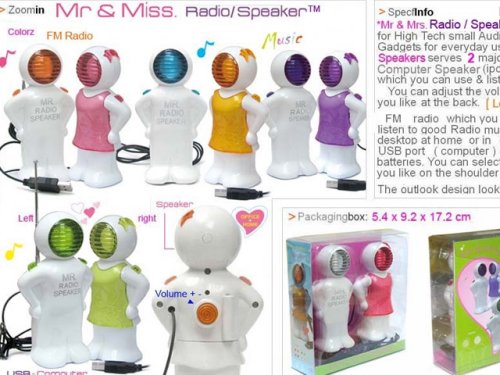 They must be newlyweds because we haven’t seen them before. Speakers or no, they’re an odd couple from Profit Charm. The pair is available in different colors. Mr. Speaker apparently has no shirt and proudly shows off his name on his chest. Mrs Speaker on the other hand wears a shirt and nothing else. So, I’m guessing they can’t make up their minds about being nudists or not.

Both speakers will work with your iPod or computer, laptop etc and they also play FM Radio. They’re powered by USB and I’m assuming their creepy faces light up. 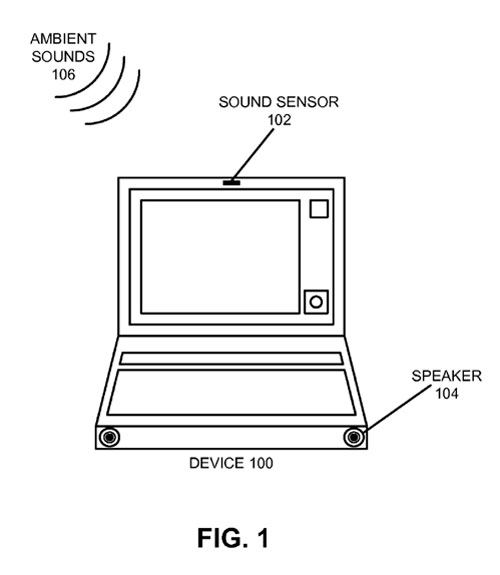 It’s a common problem. You have your headphones on and you’re in a crowd, but the music is drowned out by the crowd. Well, check this out. This Apple patent takes a look at dynamic volume adjustment that is based on your surroundings, not your music.

Looks like a sound sensor would detect the ambient noise and adjust itself based on the situation. The system wouldn’t force you to keep it at it’s own preferences and would take into account the user’s own choices for volume when setting the sound level. Interestingly, the patent application was first filed shortly after the launch of the original iPhone. Obviously Apple isn’t using it to date, but they already use ambient sensors to detect light for the displays on the iPhone, iPod touch etc. 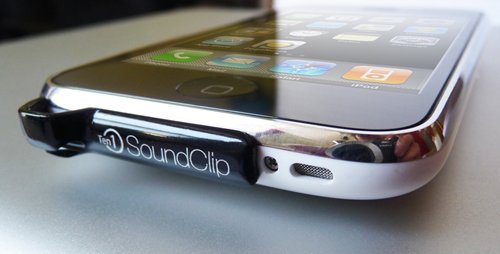 Here is a simple solution to a minor problem. On the iPhone 3G, we’re always covering up that single tiny speaker with our huge hands. That’s where SoundClip comes in, a $7.95 attachment that will give you a slight sound boost.

It’s not exactly an amplifier, but TenOneDesign says that it passively enhances the sound by a noticeable 10 decibels. It attaches to the iPhone’s dock connector and should serve as a good reminder to keep your meaty fingers away from it. It clips onto the USB cable you use to charge your device, so it won’t get lost. 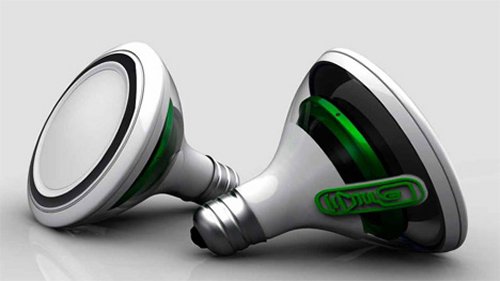 Wireless speakers are great. They eliminate wires, which is always a plus. Who wants to look at wires? So what you’re left with are just the speakers. Well, thanks to this concept, the speakers will no longer be seen either. Why not build speakers right into your light bulbs? Two devices, become one.

The SoundBulb is a wireless speaker inside a functioning LED light bulb. No speakers, no wires. Just sound and light. It cuts it down to basics. Bluetooth gives them the ability to stream audio from most computers or cellphones. You could control the volume by twisting the bulb’s outer ring, while the on/off switch for the wireless receiver is on the side. The speakers get power directly from the socket. 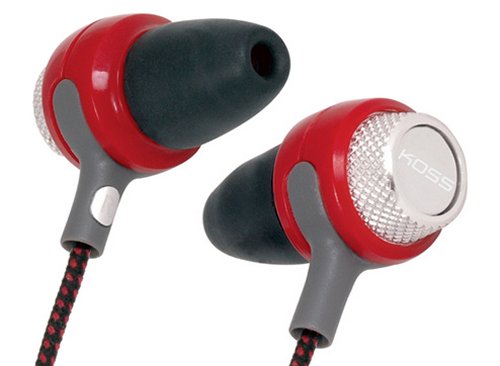 I don’t know about you, but I have problems with most earbuds. They just don’t stay put and fall out because they don’t fit my ears properly. Well, here’s an awesome solution. Koss’s CC_01 earbuds replace those foam or rubber tips with an expandable and contractable system.

All you need to do is turn the metal screw on the back of the earbuds, and the tips will adjust to fit you. Simple and amazing engineering. And great news if you, like me, are annoyed by regular old earbuds. It’s a little odd to see Koss, a manufacturer of low-priced ear-stuff, with earbuds priced at $150, but perfectly adjustable fit is a great idea. And I for one have had so much trouble with earbuds, that I find it tempting. 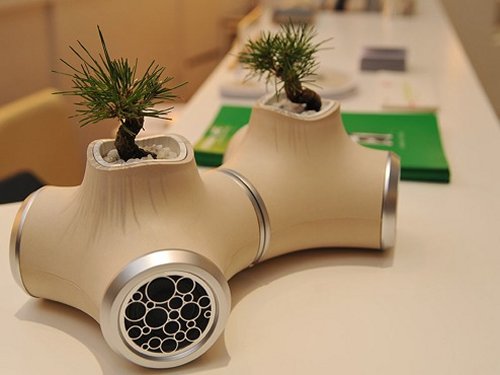 JVC’s Sound Garden concept blends tree-hugging with design. It’s a full hi-fi speaker system with bass-reflex ports and little pot areas for your plants. (Which don’t have that much room.) And it’s all made of some wonder material called “eco-plastic”. If you want, you can connect a whole bunch together for massive sound and massive plant life. Just a concept right now, but rest assured they are working on more music/plant tech as I type this. 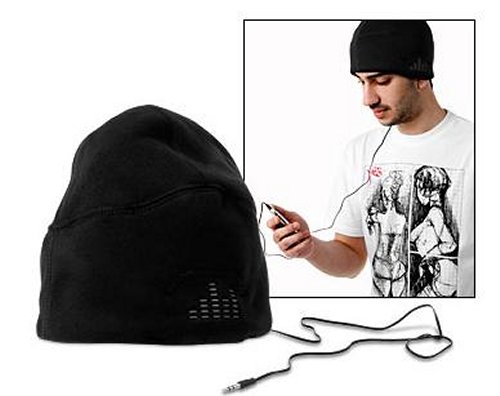 The iLogic Sound Hat actually lives up to it’s name by being fairly logical. It eliminates the need for headphones or earbuds, with the added benefit of keeping you warm and in style if your style is a plain beanie hat with a fake equalizer on it.

The speakers fit snugly over your ears and it’s lined with comfortable fleece. Just put it on and connect it to your iPod or mp3 player. Forget hassling with earbuds and carrying around headphones. Plus, others still won’t be able to hear whatever it is you listen to. 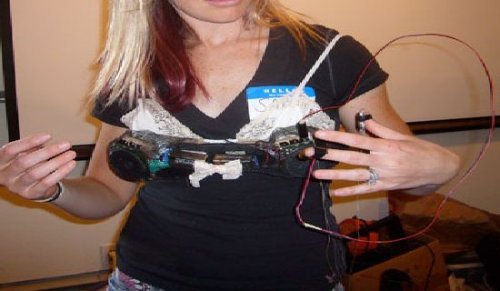 I’m really not sure what this proves, but if you modify a woman’s bra I’m there. Sarah Layne has created what she calls a “Digital Bra.” She wanted a bra that could send out feedback noises. Hey, after a few beers and coppin a feel, I would have given her some feedback. Am I right guys? Anyway, the noises couldn’t be heard until she touched the bra with the piezo disks. The fingers would have these piezo disks, which are microphones, attached and the bra speakers. Put them together and it creates strange sounds.(No. Not “Oh baby. Yeah that’s it”.)

The sounds may help you understand more about your body and you may just have a good time even if you don’t learn anything. Sarah used 2 amplifiers, 6 speakers, 2 piezo disks, netting, cloth material, plastic, cardboard and Velcro. She plans to create an updated version of the bra and some digital underwear to really spice things up. Like I said, I don’t know what it proves, except that Sarah likes to play herself like an instrument. You go girl. 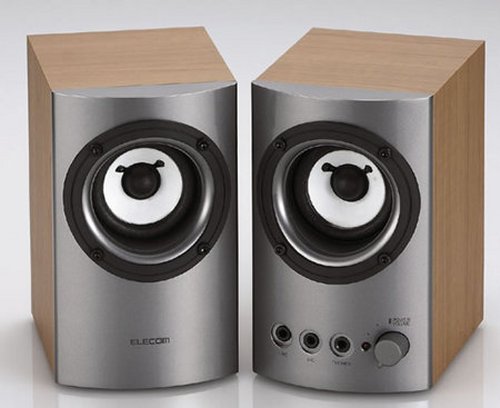 Elecom has some new wooden speakers that are fairly clean looking and cheap. Which I guess is appropriate, since they look like everyone’s cheap prefab entertainment centers etc. They Measure 80mm × 110mm × 130mm and weigh just 1.15Kgs. The new MS-130 amplifier speakers also have an output of 3 W × 2ch with a frequency of 20 Hz to 20kHz. Some other features are a stereo mini input, microphone input and output for headphones. The Elecom MS-130 should be available in Japan later this month for the price of $45.