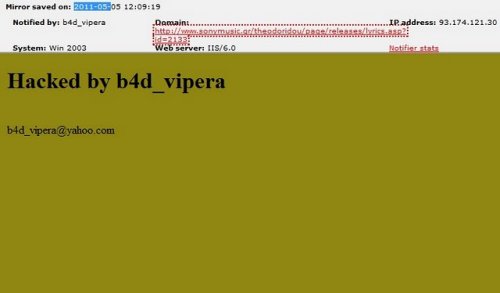 Man, Sony just can’t seem to get a break. Now Sony BMG Greece is the latest of the company’s properties to be hacked. The hackers attacked over the weekend and Hackers News Network uploaded sample extracts from a database of users’ names and email addresses onto pastebin after hackers who broke into SonyMusic.gr sent them a dump from their hack.

The data that was uploaded omits telephone numbers and password hashes that they claimed to have swiped from the site. The identities of the hackers are unknown and we have no idea if these are the same people behind the PSN attacks. Sony better get this under control before things get worse.