Posted in Clocks by Conner Flynn on August 7th, 2008 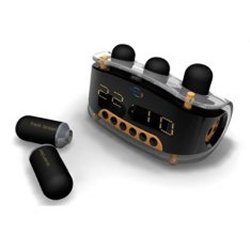 The Osim Nioi alarm clock awakes you with gentle smells as it emits either a lavender or rose fragrance in the night to help you sleep better. It uses other smells like freshly baked bread to rouse you in the morning. Each smell comes in a smell canister. Designer Alfie Lake’s concept isn’ton store shelves, but if all goes well he’ll smell ya later. Or you him. Or you bread.