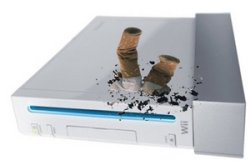 If you’re one of the many who grabbed themselves a copy of Super Smash Bros. for the Wii this weekend, you may or may not be able to get the game to play, depending on how dirty your Wii is. Apparently they had some issues in the Japanese versions of the game that are now starting to pop up here in the US.

Super Smash Bros. Brawl uses a double-layer disc with a large memory capacity. This means that a small percentage of Wii consoles may have trouble reading data off this large capacity disc if there is contamination on the lens of the disc drive. So, if you are a heavy smoker for instance, you may have a hard time playing. Apparently, Nintendo has specialized cleaning equipment that can resolve this problem and they urge you not to try cleaning it yourself.