Posted in Concepts by Conner Flynn on December 29th, 2009 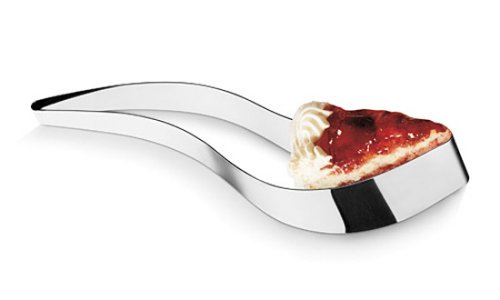 Until now cake server technology has only allowed us to cut our tasty treats. The lifting was left to us. The technology just had not advanced. Until now. The Magisso Cake Server is a cake serving game changer as well as a design concept by Finnish student Maria Kivijärvi.

Slice this stainless steel utensil into any cake or pie and with a light squeeze you can lift it out, onto your plate or directly into your piehole. Your choice.

This is similar to the Will it blend videos. The guys from Can Water Cut It use a Flow Waterjet to cut through a laptop, golf club and a blender. Here’s what happened when it was the iPod’s turn.

“What makes waterjets so popular? Waterjets require few secondary operations, produce net-shaped parts with no heat-affected zone, heat distortion, or mechanical stresses caused by other cutting methods, can cut with a narrow kerf, and can provide better usage of raw material since parts can be tightly nested.”

END_OF_DOCUMENT_TOKEN_TO_BE_REPLACED
Permalink | Comments (1) |
Posted in MacBook by Conner Flynn on May 27th, 2008 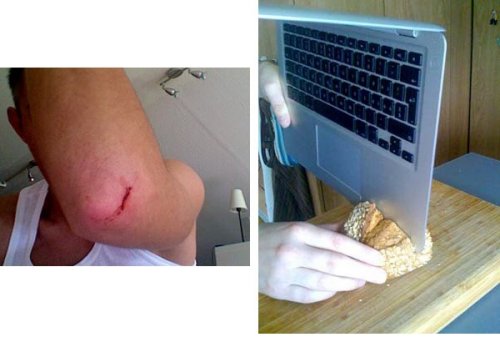 Who knew that the MacBook Air could cut you? It’s not a laptop to be messed with. Piss it off and you’ll get an iCut. At least that’s what some whacky Germans are claiming. Supposedly “Apple Talk” reader Bajuware, was just hanging out minding his own business when his MBA went all bloodthirsty on his elbow.

It looks like it cut him good, like a convict with a shiv! Another German dude says that he can slice bread with his MBA. I don’t know if the MBA can actually seek vengeance on their human masters, but I like the idea that laptops can be multi-purpose tolls in the kitchen. They slice, they dice… I’m calling Ron Popeil. I have an idea.