Posted in Apparel by Conner Flynn on October 6th, 2010 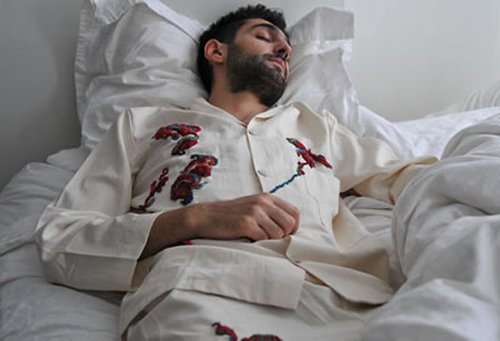 Forget alarm clocks. Dream Jammies will shake you awake. Alexander Reeder’s technologically enhanced pajamas are connected by a series of wires to an iPhone App that allows you to get shaken awake by someone connected to the other side. No matter how far away they may be.

The Dream Jammies are pretty ugly, but they are fitted with motion sensors that can tell whether the wearer is standing up, laying down or tossing and turning. The information is transmitted to their partner’s iPhone which indicates restful or restlessness via a colorful screen. If one partner shakes their iPhone, it wakes their sleeping partner. 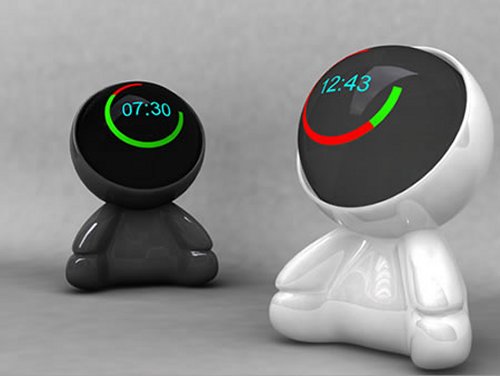 We are so busy and so sleep deprived these days. That’s why everyone is trying to invent the perfect alarm clock. Designer Tan Weihao Rios has one that he would like to share. The DOoP Multi Sensory Alarm. Creepy no?

This alarm clock will tell you how many hours you have been sleeping and how much you actually need. That’s important info that most of us are oblivious to. It features red and green dials on the face and will tell you where you are and how much sleep you need. 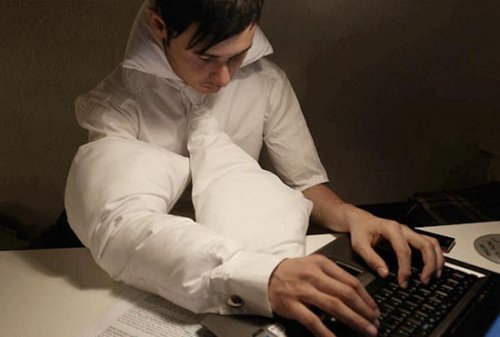 Late nights at the office just got a lot fluffier thanks to this concept from Polish designer Maja Ganszyniec that turns your collar, tie and sleeve into a pillow and looks very very comfortable. So whether you finish your work and slowly lay your head down or just plain pass out, it’s all good.

You work hard, so why not dress soft? Serta or some other bed manufacturer needs to start churning out clothes like this and completely cover us. I don’t know about you, but I want to live in a world where everyone looks a little more like the Stay-Puft marshmallow man. 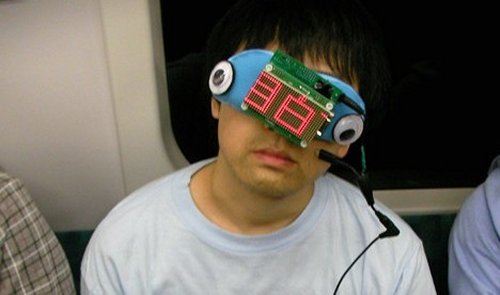 Pyocotan has a great idea with their “Noriko-san”, a mask that’s designed for napping commuters. But it has one big drawback. It relies on the kindness of other humans around you. The idea is this: If you’ve got a long commute on a train, you are probably tired and want to nap. But you don’t want to miss your stop and be late for work. It blocks light and lets you rest, with a display in front that shows what stop you plan on getting off at.

That’s where your fellow humans come in. These people around you can wake you up when you approach your stop, should you be in dreamland. Sadly, that’s why this device is doomed to fail. Lets face it, people suck. Half of them would leave you bleeding if you got stabbed. BUT it’s a great idea and who knows, maybe it would encourage some interaction. 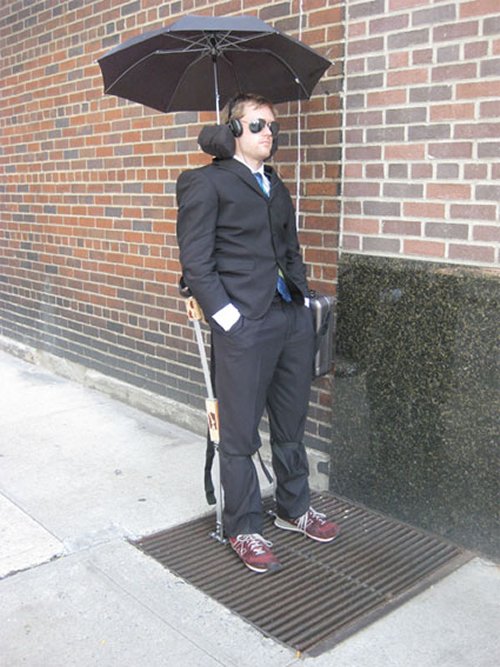 The artist who created this concept will tell you that it’s some artsy-fartsy way to make a statement and get yourself some polyphasic sleep, which is the practice of sleeping multiple times in a 24-hour period, but really it’s just an excuse to be lazy whenever and wherever you want. So lazy that you don’t even lay down. In fact, it’s a new epidemic of laziness sweeping the globe. This guy basically walks around with his Vertical Bed in a suitcase, finds himself a nice spot, anchors his bed above subway vents and sleeps for about 40 minutes a pop.

Whole damn days must really pass him by. There’s a concealed harness that makes sure he doesn’t fall over and sleep horizontally. He’s also wearing noise canceling headphones and double-mirrored sunglasses, padded with little cushions that keep his eyelids closed. In case of bad weather, an umbrella clips in the infrastructure for shelter. I don’t know, sounds like he’s doing a lot to force his body into sleep. But that’s not the worst of it. 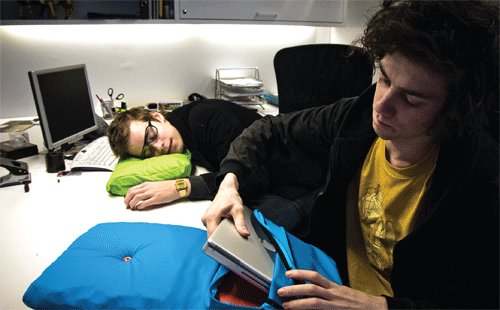 We’ve all experienced it. You’re working away on your laptop and suddenly you realize you could use a nice long nap. If only you had a comfortable way of falling forward and letting your drool fall where it may. Icelandic designer Hafsteinn Juliusson wants you to be able to crash whenever and wherever fatigue strikes, with the Napbook.

It’s so simple that’s it’s the work of genius. Just a normal laptop bag, but extra fluffy for sweet dreams. It should feel nice and soft whether your laptop is in or out of the bag. Extra sleep + extra padding for your laptop= awesome. We’re not sure if it’s available for purchase yet, but I’m getting sleepy just thinking about it.

END_OF_DOCUMENT_TOKEN_TO_BE_REPLACED
Permalink | Comments (1) |
Posted in Automotive by Conner Flynn on May 19th, 2008 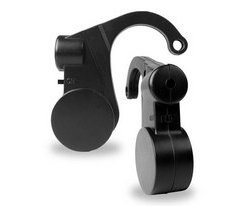 Many of us do not get the proper amount of sleep. That can be dangerous when you’re behind the wheel of a several ton killing machine. The last thing that you want to do is nod off and wake up in a hospital only to find out that you’ve ushered some other poor souls into the great beyond. Or worse never wake up again.

This little gadget sits on your ear and when your head tilts forward more than 30 degrees, a high pitched alarm will sound in your ear. It’s also great for all night gamers. You wouldn’t want to nod off in the middle of a crucial level. It will cost you $14.99 and could save your life. Probably best to get more sleep, though. 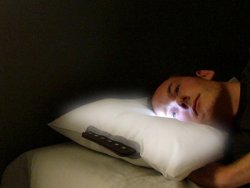 There’s no shortage of interesting and unique alarm clocks that serve as alternatives to the usual, but this may be the most gentle way they have come up with to wake you up. It could also make you look very creepy to your partner. It was designed by Ian Walton and Eoin McNally, who wanted to create a product that could help combat the rigors of a “24 hour” lifestyle.

A grid of LEDs begins to glow about 40 minutes before it’s officially time to wake you up. That way, a slow and gentle increase in light will bring you out of sleep more naturally. It may even stop your traditional bitching and moaning against the pillow. The glo Pillow is just a prototype, but it did pick up one of Time Magazine’s Best Inventions of 2007 awards, so there’s hope. 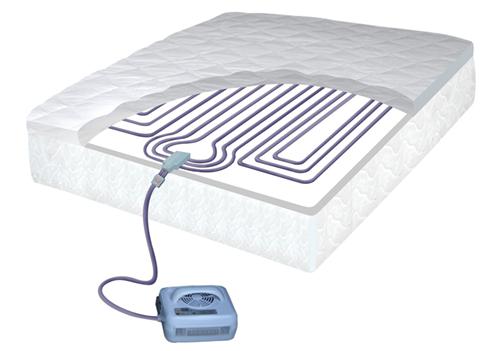 This one is like the Chillow pillow we told you about last year. Instead of a pillow, it’s an entire mattress and is a good idea no matter what climate you live in. It’s capable of heating and cooling itself so you can be comfortable in bed. That way you can fall asleep faster or let it help you stay awake. The ChiliPad uses a small and nearly silent motor that they claim is similar to semi-conductor technology that cools your computer. This heats or cools water, which is pumped through coils inside the mattress.

With the included wireless remote you can control the temperature between 68F and 118F. As you might have guessed, it is not priced cheaply, $479 for a single zone twin and $999 for a dual zone king. But hopefully you can save enough money on nighttime heating in your home and cooling costs, so that it will pay for itself. It will also solve that whole Goldilocks and the 3 Bears thing: It won’t be too hot, it won’t be too cold, it will be just right. 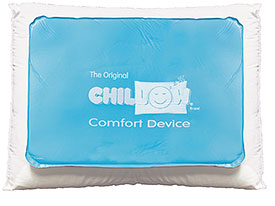 This is little sleep assisting gadget is called a Chillow from Soothsoft, a pillow that keeps you chilled. Even if it didn’t work I like it for the name and the idea.

This chillow is designed to eliminate the need for you to flip your pillow over and over at night to find the cool spot. If only my pillow would stay cool, or chilled?

It’s made out of some sort of foam or gel material, and you need to add water. There is no mechanical parts or electricity that keep it cool. You just insert it into your pillow case and it automagically draws heat away from your head and keeps it cool for hours.