Posted in Concepts by Conner Flynn on February 7th, 2008 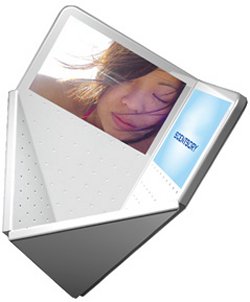 This concept phone by Nokia is being called the Scentsory and it’s a fascinating device. It uses the human senses of sight, sound, touch and even smell for a multi-sensory experience. If this concept ever sees the light of day, it could revolutionize remote communication and interfacing. The dual-screen mobile has an LED touchpad, speakers, a camera and temperature sensors.

It has the basic audiovisual features, but Scentsory could also detect, transmit and emit smells, as well as radiate colors, lighting, and temperature from the caller’s environment. It has a sort of electronic nose that works with highly sophisticated sensors. The nose samples the odor of the caller’s environment and transmits this to the recipient electronically. Apparently this works due to distinct genetic patterns that are associated with every odor, and it’s simply a matter of matching electrical harmonics with gene activity. The perception of a smell by electrical stimulation could be technologically induced.