Posted in Samsung by Conner Flynn on November 8th, 2010 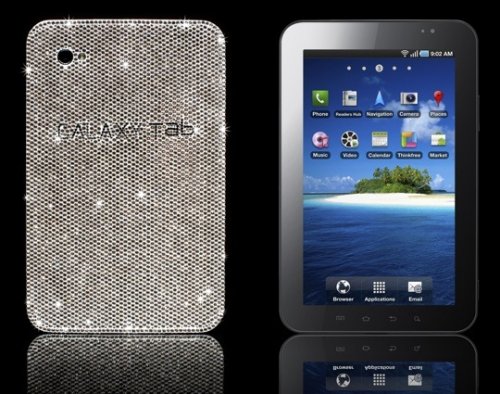 If you think that the Samsung Galaxy Tab is expensive already, Harrods has a version that raises the price to new levels. They are offering a custom Samsung Galaxy Tab that comes with 5700 Swarovski “crystals” which are already included into the final price point.

These “crystals” are all glued on by hand, and carefully placed around a Galaxy Tab logo in “Jet Hematite”. This all translates to a £2,699 price. We reckon you’ll leave a trail of crystals behind you if you use this thing. 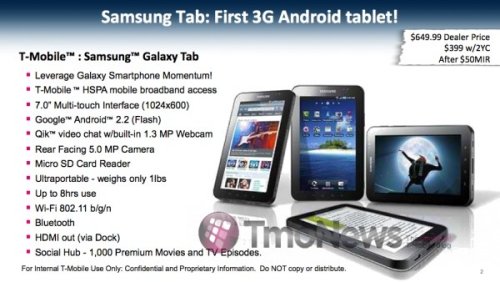 If this slide is truly legitimate, then we at last have a price for T-Mobile’s Galaxy Tab. It will cost you $399. If it is true, it’s a bit of disappointing, as that’s twice the Galaxy S’s price despite lacking telephone functionality.

Still, we are talking the first truly impressive Android tablet, so it shouldn’t be cheap, should it? We will know if it is true soon enough at any rate. 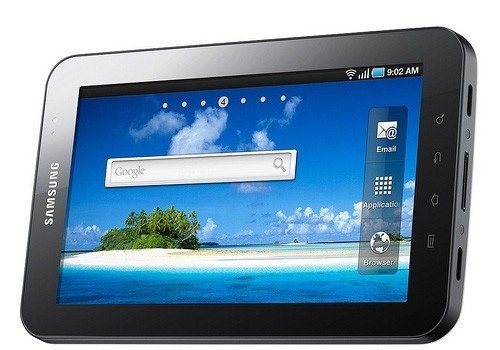 It’s official. Samsung has all four of the major US carriers on board. The 7-inch Galaxy Tab will be heading to Verizon, AT&T, Sprint and T-Mobile sometime during October / November. Samsung is leaving availability and the pricing announcements to the carriers. We can tell you that the keyboard dock will cost $100 and the desktop dock $50.

Some specs for the US version of the Galaxy Tab include a 1GHz Hummingbird, Android 2.2, 7-inch 1204 x 600 WSVGA resolution display, as well as front and rear cams. Apparently TouchWiz will be tweaked slightly for the US. It won’t have the Reader or Music hubs, but will have the social networking apps and a new Media Hub. There will also be preloaded carrier apps. 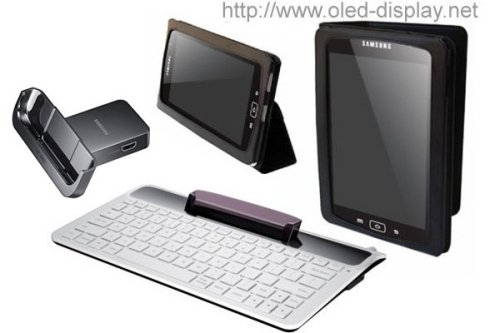 Is Samsung even trying to keep the Galaxy Tab‘s details a secret? Apparently not. Now some accessories for the upcoming 7-inch Android tablet have been spotted on one of Samsung’s online portals, with pricing details. 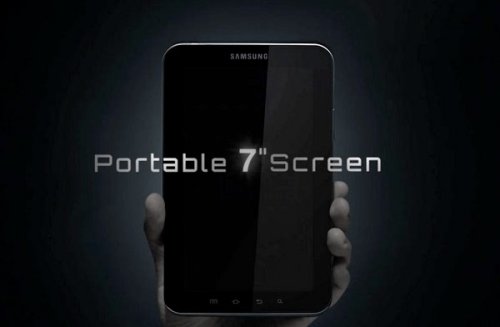 Now we have something official. The official Samsung Galaxy Tab teaser video reveals several features that were previously only rumored or hinted at. It has Android 2.2 on a 7-inch display, video calling, Swype, HD movie playback, “Flash support,” GPS navigation, an e-reader, and a whole lot more.

The video also references augmented reality and video calling (which might indicate a front-facing). And in one shot there’s what appears to be a LED flash bulb next to the camera. They don’t call them teaser videos for nothing. 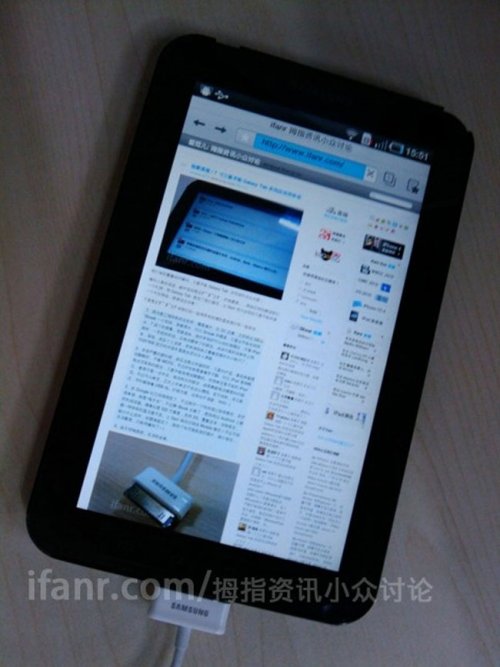 The Samsung Galaxy Tab should get official soon since we’ve already seen some pictures of the device. And now, more pictures of this tablet have surfaced, confirming that it will be running Android 2.2 and sport the model number GT-P1000.

The leak also says that the device is lighter, constructed from lightweight plastic. The 7-inch display will have a resolution of 1024 x 600 pixels. There’s also the 3.2-megapixel camera, 3G support, and built-in eBook application.