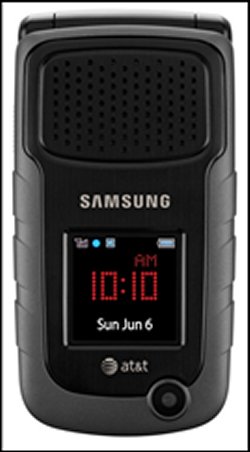 Fans of tough and rugged phones will be glad to hear that AT&T has announced that the rugged push-to-talk Samsung Rugby II will be shipping soon. The phone will support AT&T’s HSPA 7.2Mbps network, A-GPS and voice-guided turn-by-turn navigation using AT&T’s Navigator service. It’s tough enough for Mr. T, but even your wimpy hands can use it.

Some other features of the Rugby II include a 2-megapixel camera with video recording capabilities, Bluetooth and microSD card slot. The phone will be shipping on June 6th for $130 with a two-year contract after a $50 mail-in rebate.