Posted in Mobile Phones,Motorola by Darrin Olson on July 15th, 2007 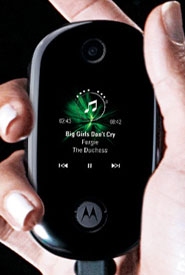 It looks like Motorola might be emerging soon with a new clamshell style media phone named the ROKR U9. PhoneScoop is reporting from a “source” that the U9 will have a PEBL-like rounded look to it with an added large color LCD on the front along with music playback controls. Also notable is a mini-USB connection which looks like it may not support and standard headphone jack and instead require mini-USB headphones. This would kinda’ stink but it’s not unheard of for Motorola.

No more details were given in regards to price or release date of the ROKR U9, but we’ll keep watching. This one looks like it might be a pretty nice media phone, and possible a higher-end model from Motorola.