Posted in Personal Transport by Shane McGlaun on May 16th, 2008 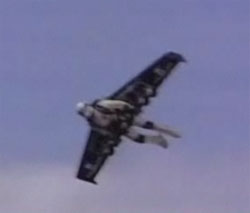 For thousands of years man has dreamed of flying like a bird with nothing but a wing attached to his back like Icarus and his fabled wings. The holdup has been a gnawing need by most men to not plummet to their death thanks to an Icarus-like wing failure.

A Swiss man has set a record by becoming the first person to fly with nothing but a wing and a jet engine strapped to his back. The man names Yves Rossy was dropped from a plane over the Swiss Alps with a parachute and a folded wing.