Posted in Personal Transport by Conner Flynn on June 22nd, 2008 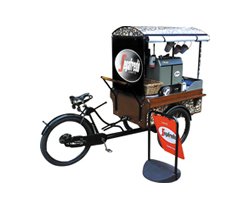 I can’t think of a better business idea then putting a new spin on people’s insane need for coffee and making in convenient. That’s what the Bikecaffe is all about. The business was launched in the UK in March, and proved so successful that Bikecaffe’s founders, Will and Steve expanded into the rest of Europe.

The company’s trikes use gas-powered machines to brew the coffee and can produce up to 500 cups a day. For some reason, they serve the drinks in recyclable containers, despite the fact that they’re using gas to brew it. Brilliant idea. Instead of making the people come to you, you bring the coffee to the people. Let’s face it, people are everywhere.