Posted in Sports by Conner Flynn on December 19th, 2008 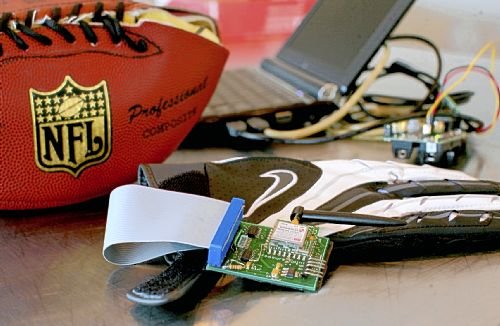 We’ve all seen a ref make a bad call at their team’s expense. It sucks. NFL refs aren’t perfect. But footballs and gloves with built-in sensors will make it easier for them as well as put some out of business. It might even mark an end to coach’s challenges. Dr. Priya Narasimhan of Carnegie Mellon University has developed this football and gloves, outfitting them with wireless sensors that can precisely determine whether or not a ball hit the ground before being caught or whether or not someone had control of the ball before fumbling. Using GPS, they could also determine whether or not the ball crossed the goal line.

The same kind of sensors could easily be adapted to shoes, used to measure stride and running patterns, or even in shoulder pads, calculating blocking positions and force.