Posted in Sony by Conner Flynn on February 3rd, 2011 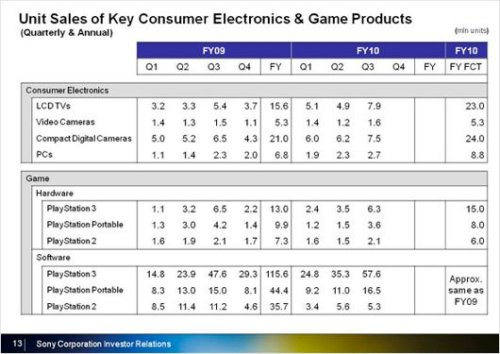 Despite a small 6% dip in quarterly sales year-over-year, “due to a decrease in sales in the game business resulting primarily from unfavorable foreign exchange rates,” Sony’s Networked Products & Services group, which houses the PlayStation brand, managed to post ¥45.7 billion (about $564 million) in profits for the third quarter period, which ended December 31. That’s a 135% gain over the prior-year’s period.

Even though quarterly sales of the PlayStation 3 and PSP have lagged year-over-year, Sony is predicting 15 million PS3 consoles sold for the fiscal year, compared to 13 million for the year prior. This has a lot to do with “cost reductions” on the PS3 and significant gains in PlayStation 3 software sales. So things are looking great for the PS3 right now. As for the PSP and PS2, not so much.

The economy is bad and when the leading CPU maker in the world, Intel, announces that its profits aren’t that great and it will be restructuring to better compete you can bet that the second place chipmaker is on rough times as well.