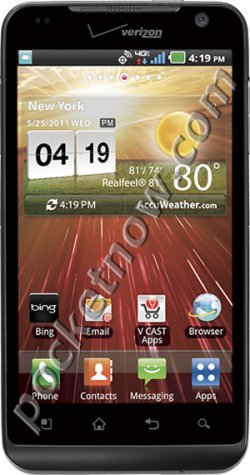 The latest shots of the LG Revolution show a date of May 25, 2011, so we can surmise that Verizon will release it on that day. That is not a new strategy, HTC and Samsung have also used launch or release dates in press image screenshots, and LG has done it before as well. Then again, you never know. Keep your fingers crossed.

The Revolution would be either the second or third 4G LTE phone to be released. The Thunderbolt is already out, the Droid Charge has been delayed and the Droid Bionic has been pushed back too. The Revolution is a single-core device with WVGA resolution, which might make it less attractive to some, but it does include Netflix for Android which is a bonus.