Posted in Mobile Phones by Conner Flynn on July 13th, 2008 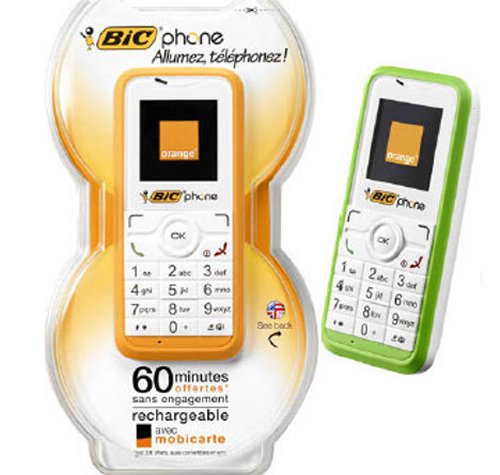 Disposable cell phones are everywhere. That’s nothing new. But disposable cells must have now reached critical mass if Bic, makers of disposable lighters for decades, is in the game. The company has teamed up with Orange France to launch their Bic disposable cellphone. It’s a prepaid phone that comes pre-charged and gives you an hour of free calls. It even comes with a SIM card already inserted, which needs to be activated to start making calls.

It’s manufactured by Alcatel and they kept it simple as the user can only make calls and send texts. You can get them in “Citrus Orange” or “Lime Green” for $80 starting August 7th in France. They probably should have thrown in standard Bic lighter for that price. It’s the least they can do. Then you would be covered for both making calls and lighting your smokes.