Posted in Home by Conner Flynn on September 14th, 2008 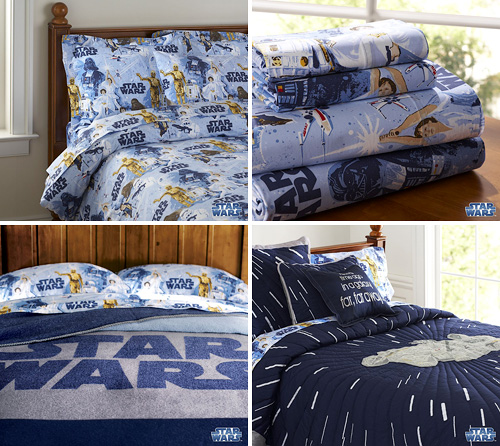 For those of us who were growing up during the original Star Wars trilogy, those times were magical. More action figures then a kid could collect? Awesome vehicles for them to play around in? Bedsheets so your imagination could soar at night? Disco? Maybe not so much Disco. If you had the bedsheets you were head nerd, let me tell ya.

And while Pottery Barn generally impresses the ladies, they are appealing to 1970’s kids now too with these classically styled sheets. You can get everything you need to deck out your bed. Sheets range in price from $14 to $109. Quilted bedding can cost as much as $219. They come in queen sizes, full and twin. Now go bug your wife. She usually gets her way in the decorating department, no? Time to make a stand and demand these. Be brave. A kick to the nuts can build character.