Posted in Google by Nino Marchetti on December 14th, 2007 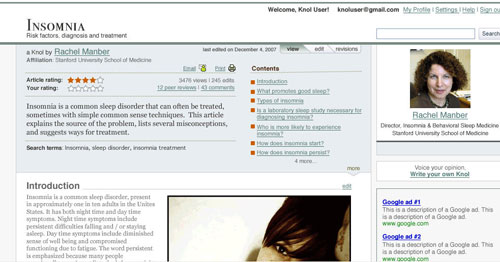 Google late yesterday revealed it is working on what could easily be considered a competitor to the popular open-ended online encyclopedia Wikipedia. Google’s new offering is being called knol and it’s currently in closed beta testing.

knol, as Google describes it, means “unit of knowledge.” The idea behind knol is to let “people who know a particular subject to write an authoritative article about it.” Google said a knol on a particular topic is “meant to be the first thing someone who searches for this topic for the first time will want to read.” This seems to imply that when one searches on a particular topic the “knol” for that will appear as the first search result, though Google states it will “rank the knols appropriately when they appear in Google search results.”