Posted in Tablet PC by Conner Flynn on March 6th, 2011 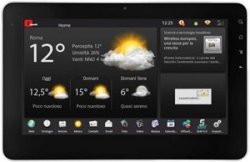 Olivetti was originally known for typewriters, but with typewriters not exactly flying off the shelves, they’ve turned to manufacturing tablets instead. Olivetti has announced the release of the OliPad, and are calling it Italy’s first tablet.

The OliPad features a 10-inch screen, 3G, WiFi, Bluetooth connectivity, NVIDIA Tegra 2, Android 2.2.2, and a 1024 x 600 display. There are also USB and HDMI ports and a 1.3 megapixel camera. Launching at the same time is the Application Warehouse, “a virtual storehouse of configurable and customizable software applications designed by Olivetti specifically for business and government.”