Posted in Automotive by Conner Flynn on January 15th, 2009 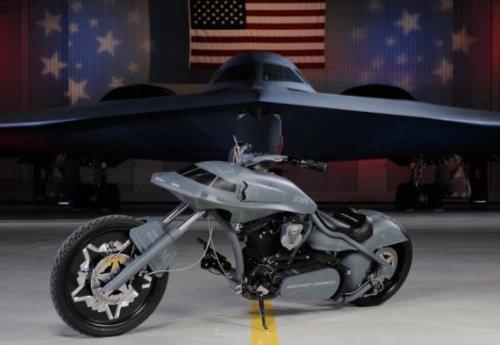 This year marks the 20th anniversary of the B-2 Spirit stealth bomber. What better way to commemorate the anniversary than with a cycle by the crew at Orange County Choppers. As usual they took the basic look of the plane and made a cycle version. The bike even has some of the original titanium from the original B-2 aft deck and each wheel features scale models of B-2s in star formations.

It’s pretty awesome, for sure. But is it just me, or does it kinda look like a Dolphin? It almost looks toy-like. Very plastic looking. At any rate, it’s nice to know that our military has their priorities straight when it comes to spending our tax money. Hopefully this bike has some hidden firepower.