Posted in Clocks by Conner Flynn on September 13th, 2009 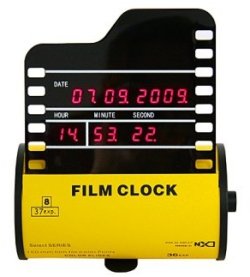 Okay kids. I’m going to give you a minute to go wiki “film”. Go on. I’ll wait. Okay. Done? Know what film is now? Awesome. It’s the stuff that used to capture peoples souls when you took a photo. If you exposed the film to sunlight, those souls were lost forever and drifted into the air like gossamer, leaving the actual people who were phographed drooling vegetables.

Anyhow, the Roll Film Clock looks like film, and mixes in a digital clock. It’s a digital clock dressed up as a roll of film. It wants to go out on Halloween and show off. Get candy. Score some hot chicks. Brag that it costs $62.