Posted in Nintendo DS by Conner Flynn on March 16th, 2011 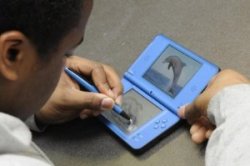 Nintendo of America has announced a partnership with the National Art Education Association (NAEA) where they will introduce the Nintendo DS into classrooms in selected schools across the country. The idea is to give students a fresh, fun way to learn drawing and painting techniques.

Art teachers in elementary, middle and high school classrooms have been given Nintendo DSi XL systems and copies of Art Academy. These teachers will use the game console and the game to make classroom activities more engaging and fun. This should definitely make the classes more fun for kids.

Forget the i-Dog. Check out this toe tapping robotic dog called Wappy Dog from Sega Toys. Sega Toys and Activision will be releasing this new robotic mutt alongside a video game for the Nintendo DS. Wappy interacts the video game and your child alone.

You can talk to the dog and pet it and Wappy will respond by making noises, moving or glowing with it’s colored lights. Sound is actually what makes Wappy tick. The beeps fromthe video game will have Wappy reacting in various ways.

Typing isn’t involved in any of the Pokemon games that I’ve ever seen, but the upcoming Pokemon typing tutor game for the Nintendo DS, Battle & Get! Pokemon Typing DS, will come bundled with a Bluetooth keyboard.

The cartridge will have a built-in Bluetooth chip, since the DS itself doesn’t have Bluetooth. Our guess is that a game that comes with it’s own keyboard will not be a hit since kids want to play games, not type, but who knows. The Pokemon typing game will be released in Japan this April for an unknown price.

This one is for your DS. It will make you look like the Doctor trying to pry open the Pandoricon with two thousand Daleks on your tail as you tap tap away. These are only available in the UK right now, but maybe they will hit the US soon. 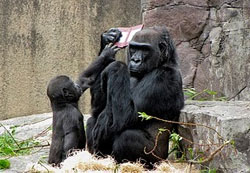 A gorilla at the San Diego zoo recently came by his own Nintendo DS portable game console. The DS appeared in the gorilla habitat when a boy visiting the zoo dropped it inside.

The gorilla picked the DS up and proceeded to mess with it to try and figure out exactly what it was. I wonder what he would have done if the thing was tuned on when he picked it up. 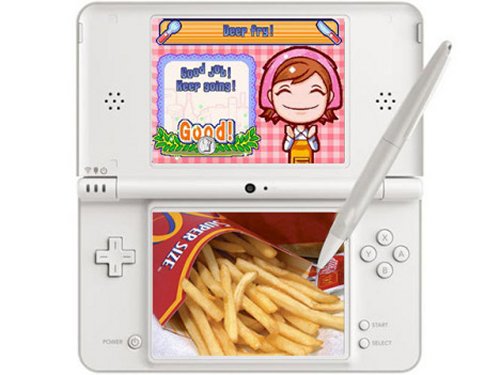 We told you back in March about how McDonald’s was going to start training their employees using the Nintendo DS. It’s an interesting idea. And if you are wondering just how it works, we have a video after the jump.

The device being used is the Nintendo DSi, one that features the familiar golden arches. The training is like playing Cooking Mama, but for your fast food corporate masters.

Looks like McDonald’s is embracing Nintendo’s portable gaming console to train it’s employees. The fast food company is developing a Nintendo DS training program for its part-time employees, called eSmart. It will cost ¥200,000,000 (or about $2.2M USD) to develop, which is apparently no big deal for the mega-giant.

The company hopes that the software will reduce training time by at least half. And everyone in Japan is already familiar with the Nintendo DS and plays it all the time, so it seems like a marriage made in heaven. 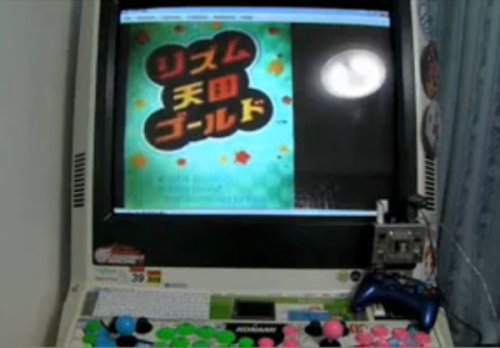 Did I miss something? I must have because I thought the whole idea of having portables was to, well have portability. You know, devices where you give up some graphics for the ability to play anywhere. So why would anyone want to make an arcade cabinet that plays DS/PSP games?

Just because they can. And I guess that’s good enough reason for any crazy mod. I may not understand why, but I gotta hand it to them, it’s unique. Check out a video below while I scratch and shake my head. 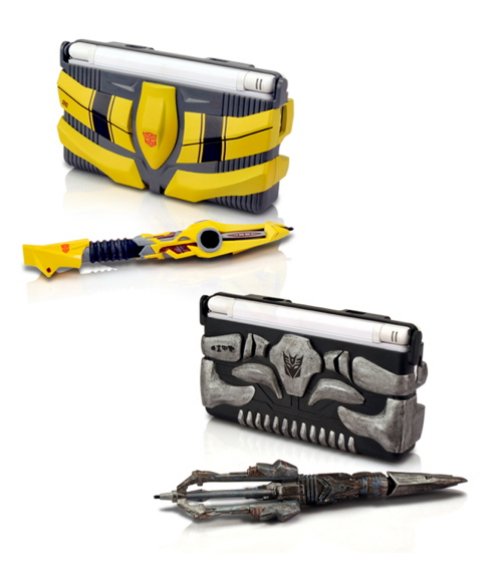 Revenge of the Fallen, the second installment in the Transformers movie franchise, is out this week and there’s no better way to celebrate than by geeking up your DS with these fancy costumes. If you’re into cosplay, maybe you and your DS can match.

The stylus and armor is available in both Bumblebee and Megatron and will cost you $19.99 for both, or $12.99 for either the stylus or the case. 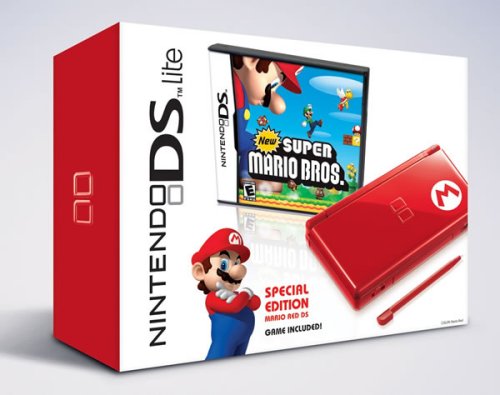 Jodi Wykle just wanted to get her son a new Nintendo DS for his birthday. Sadly, what he got was a box of rocks. The story goes that the kid opened up his gift only to find bunch of stones and some rolled up Chinese newspaper in place of the popular handheld.

Doesn’t that just suck. Maybe the kid had it coming and it’s the work of Santa, who is sadly a few months behind…Or ahead of schedule. Whatever the case, the mom contacted the local Wal-Mart where she bought the box, but reportedly workers told her it wasn’t their problem and that she should contact Nintendo. Big surprise, Nintendo told her the same thing. 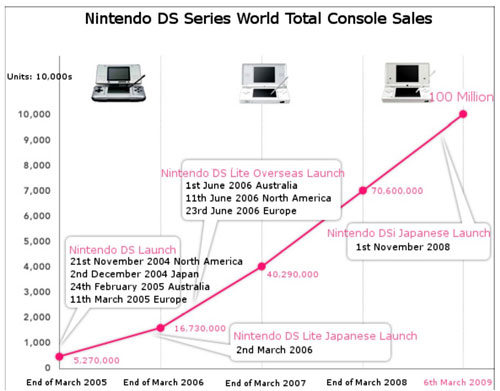 When it comes to pure portable gaming consoles there are two choices — the Sony PSP and the Nintendo DS. You can play games on other devices on the go, like the iPhone and iPod touch, but the DS and PSP are the only dedicated portable gaming systems.

Nintendo has announced that it has now shipped 100 million Nintendo DS consoles since the systems were introduced. The original DS launched in 2004 and offered dual screens and voice recognition, something not offered on other portable consoles. 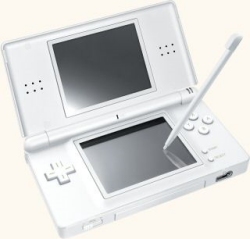 Nintendo has plans to launch a new version of the popular Nintendo DS handheld game console by the end of this year, and it sounds like they are doing more than just adding new colors this time. The new model, yet to be named, will feature a camera and music player, putting itself in competition with a larger number of portable devices and opening up a whole mess of new game possibilities.

This news does not come straight from Nintendo, or at least not yet. It does however come from the Sunday edition of The Nikkei Business Daily, which is a well renowned newspaper in Japan. The new DS from Nintendo is expected to cost around $190 in Japan compared to the $158 price tag on the current DS. The DS goes for $129 currently in the United States.

END_OF_DOCUMENT_TOKEN_TO_BE_REPLACED
Permalink | Comments (44) |
Posted in Nintendo DS by Conner Flynn on May 25th, 2008 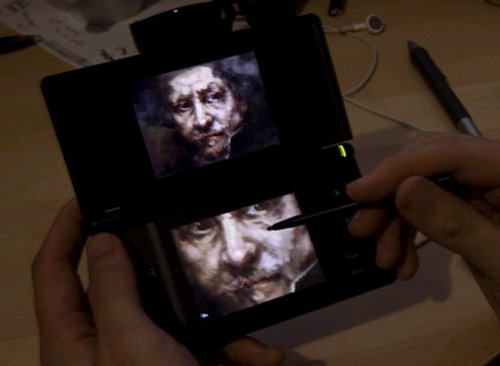 If you’re looking to use your DS as a sketchbook or drawing pad, here is a DS paint application that turns your system into one. It’s called colors. All you need are a DS-compatible flash cartridge and a microSD card. It’s a pretty basic program, not even having layers or an undo option yet, but it’s still a pretty impressive app.

More features will be on the way soon, such as DS-to-DS painting that will allow collaboration. You can use a full-size stylus if the DS stylus isn’t doing it for you, and also export projects using Wi-Fi or microSD. Looks like you can create some real masterpieces. Check out a video below.

END_OF_DOCUMENT_TOKEN_TO_BE_REPLACED
Permalink | Comments |
Posted in Nintendo DS by Darrin Olson on May 16th, 2008 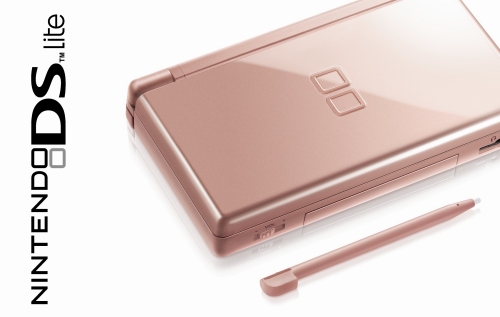 Nintendo must have had some great feedback about the Metallic Rose Nintendo DS that came in the Nintendogs bundle, or it just didn’t do well and they have a lot of extras without the paw print. Either way the company is launching metallic rose as another standalone color for the lineup of DS’s, not to be confuse with the standard pink.

Some celebs by the names of America Ferrera and Carrie Underwood are going to also help push the latest DS in some commercials starting May 19. No pricing has been released but we would guess this model would be priced the same as the other standalone DS hardware systems.

END_OF_DOCUMENT_TOKEN_TO_BE_REPLACED
Permalink | Comments (5) |
Posted in Chargers by Darrin Olson on May 16th, 2008 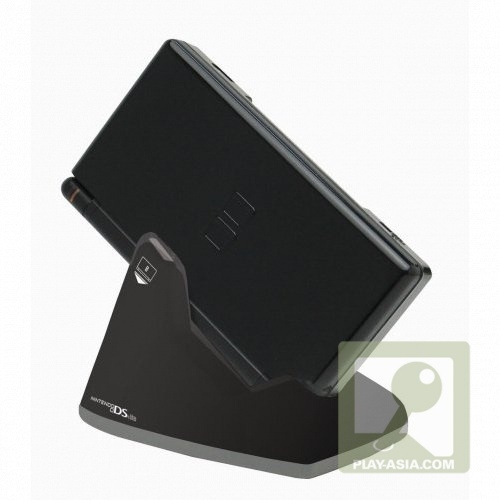 For some reason it just seems nicer to me when I have some type of cradle, dock or stand to charge my gadgets with instead of just a cord and naturally we were excited to see this charging stand for the Nintendo DS Lite. Sure the docks take up more room on my desk and are difficult to take along when you travel, but with them each items has their own neat and special place.

This stand looks to take up a little less space then it could, holding the DS upright on its side instead of flat. It comes in colors of black or white to match the black and white DS’s, and is expected to be available from PlayAsia sometime yet this month for just under $17 USD.