Wearing a suit and tie in the office can make for a hot day, but with Thanko’s latest offering, you can cool down while wearing your monkey suit. The USB-powered necktie clip cooler is just $35. Sadly it’s only available to those in Japan though.

I guess the rest of us will just have to sweat a bit longer. The device is powered by either USB or a battery. Just clip it to your tie and it will send fresh air your way. This is basically just a computer fan mounted on your tie. 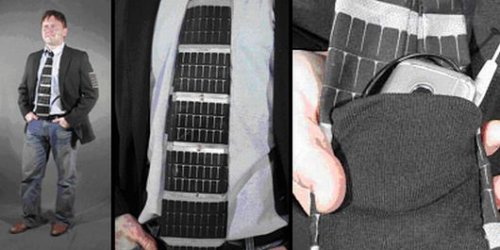 We’ve seen our share of solar powered devices, but nothing so hideous and blatantly dorky as the solar powered necktie. It will not only collect solar power, but it also singles you out as a geek. You can thank a group of braniacs at Iowa State University for creating it. It’s made from newly developed solar fabrics. The solar panels are tiny and laid out in a grid that at least makes it look somewhat like any other tacky tie.

It even sports a pocket sewn into the back so your device can suck precious juice like a parasite that no one can see. This technology can only end with a living symbiote tie that strangles you dead, thereby making it look like you’ve committed suicide. Then they’ll take over the world. No one will know. It will just seem like unusually high suicides. Let’s just stop wearing them now, can we? They’re silly.