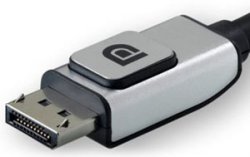 The VESA group has released the latest DisplayPort version 1.2 which delivers 21.6Gbps of data rate, making it ideal for handling 3D, color depths higher than 24-bit and faster frame rates. It can also handle multi-streaming. A single cable is capable of outputing two 2560×1600 displays at full frame rate, four 1920×1200 screens, or a single screen with a resolution of 3,840 x 2,400 pixels.

The data channel that was introduced with DisplayPort now hits 720Mbps with DisplayPort 1.2, enabling it to run at full speed via the display cable and gives it Dolby or DTS audio as well as headroom for webcams, 100Mbps Ethernet and other technology that would normally require a separate cable.