Posted in Projectors by Conner Flynn on December 3rd, 2008 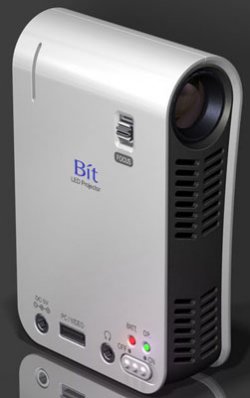 Seems like every company is getting on the tiny projector bandwagon. So, it’s going to be hard for any of these to stand out. Adtec’s two new MP15A Series projectors certainly don’t look like they’re going to stand out from the crowd

As far as Specs, they’re pretty run of the mill,, with 15 ANSI lumens, a 200:1 contrast ratio, and VGA 640 x 480 resolution, they have an LED lamp with about a 20,000 hour life. The 15AW is white, while the 15AB is black. Other then the color, they are identical. Both will be available in December and January in Japan. No word yet on releases in other countries.