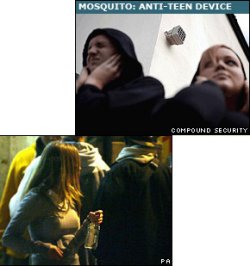 Stores and malls in England have been using an ultrasonic device known as the Mosquito Alarm to keep kids from loitering. Because everyone knows that kids are just large insects with ipods and skateboards. It emits a high-frequency noise which is audible and unfriendly to young ears, but people over 20 usually can’t hear it. (I know there’s a Logan’s Run joke there somewhere.)

This is the same frequency that kids have been using for their cellphone rings, so older people don’t know when they have incoming calls. Anyway, there is now an uproar from the children’s commission for England and groups like civil liberties group Liberty. Their campaign is called “Buzz Off”. The device effects everyone under 25, and guess what? That includes babies. Then they site that it discriminates against all kids, whether they’re bad seeds or not. Obviously, they have some valid points. I propose that anyone who turns 30 needs to be introduced to carousel and euthanized. Should they run, a sandman needs to be dispatched who can shout, “We’ve got a runner.” and go for their blaster. Ah…There’s the joke.