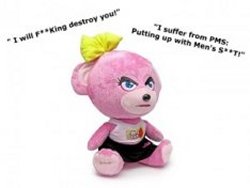 Now ladies, I’m not saying that some of you can be hard to live with during that special time of the month when Aunt Flow comes to visit. I’m not saying you can get a little cranky and yell and curse at a man until he’s just a hollow shell of himself. I wouldn’t do that. Why, I didn’t even comment when that Wiimote sailed past my head and stuck into the drywall like a dagger in Mario-land. No, I’m not saying anything.

It’s the makers of the PMS Teddy Swear Bear that are saying it. It’s cute and pink and looks cuddly. Like you. That’s where the similarities end. Really. The bear has mood swings and says things like “I Will F$%$%!king destroy you”. So this bear obviously isn’t for kids. It will arrive in stores this November for $29.99. I’m not saying you can identify with her boiling red-hot rage. Now how did my clothes end up all over the front lawn?