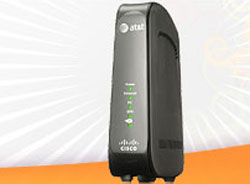 We heard a lot about femtocells last year. A femtocell is a device that allows your cellular phone to connect to the Internet for calls to provide better coverage indoors. So far there have been a few of these femtocells launched.

AT&T has offered details on its first 3G femtocell it is calling the AT&T 3G MicroCell. The MicroCell requires a broadband Internet connection and will support up to 10 3G cell phones in a home or small office. Up to four simultaneous voice or data users are supported at once.