Posted in Musical Instruments by Conner Flynn on May 4th, 2008 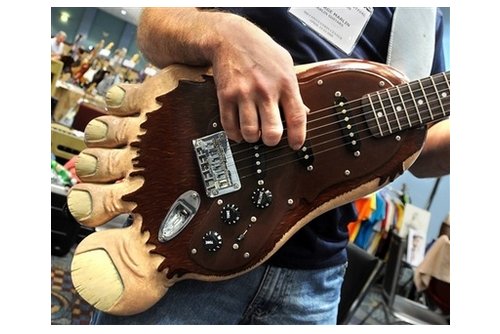 There have been many a Bigfoot sighting in the more secluded areas of the globe, and I aint talkin redneck truck shows that take place in loud stadiums. Who knew that Bigfoot rocked his own huge guitar? Which raises the question: Does Sasquatch play Guitar Hero? Probably, but it’s a lot like playing chess with a wookie. The loser in a Guitar hero rock-off with a Sasquatch is always the human. He WILL break you.

Guitar maker George Marlin created it and showed it off at the Miami Beach Guitar Festival Sunday, April 13, 2008, in Miami Beach. You know, if Leonard Nimoy had entered the Forest strumming this thing during an episode of In Search of… he would have lured the big guy out to autograph it and we would have had proof they exist.