Posted in Watches by Conner Flynn on December 28th, 2009 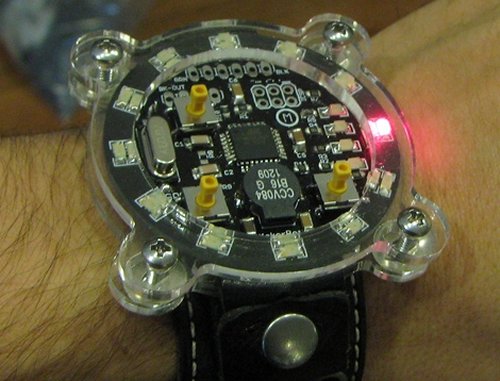 This is one of the coolest watches we’ve seen in some time. When you think Arduino, you tend to think robot projects, not watches. This Arduino based MakerBotWatch actually manages to be fresh and exciting and it’s something that any DIYer can try.

The MakerBotWatch uses an ATmega328 microcontroller to run the bootloader, while the two concentric circles of LEDs show minutes and hours. A vertical row of four LEDs adds in the additional resolution needed to get 60 minutes on the watch face. The MakerBotWatch is expected to go into production as a kit soon, but with no laser-cut bezel.