A new product listing has listed a Microsoft Arc Touch Mouse for $70. So of course rumors of Microsoft working on a rival to Apple’s Magic Mouse have begun. The prototype pictured above comes with a similar arc-shape to the current folding Arc mouse from Microsoft.

Curved transparent plastic and frustrated total internal reflection (FTIR) will be used to track several points of contact. And remember, touch/multitouch is already natively included in Windows 7, so a mouse like this would compliment it.

Looks like several users on Apple’s Discussion Boards are claiming that their Bluetooth keyboards have been devouring batteries like crazy since they started using a Magic Mouse. Even after switching to rechargeable batteries and running all updates, the problem continues. Most of these users claim that they need new keyboard batteries weekly. That ain’t good.

The theory is that the Magic Mouse is preventing the keyboard from going into sleep mode, which makes sense. After one user swapped his Magic Mouse with a Logitech model, the problem was solved. Another user claims that Apple Tech Support says that this is a known Bluetooth driver issue and that a fix is on the way. 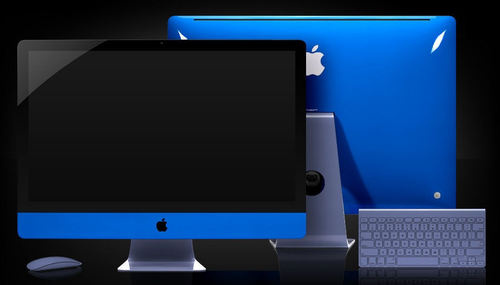 After you’ve let Colorware have their way with all of your other gadgets, the outfit now wants to customize your latest Apple gear. For just $500, you can allow your iMac to wear a technicolor dream coat, or you can pay $700 premium (over Apple’s prices) to buy one from ColorWare.

They’re also painting the Magic Mouse, so it won’t feel left out. It’ll cost you $100, or $30 bucks to send your own in. Why not spice things up with some new colors?

Also in Apple news, say hello to the Magic Mouse. It’s a “two button” laser mouse, which has one button and no scroll wheel. Instead it has a multitouch surface across the top that allows you to do similar gestures like with the Mac trackpad: two-finger swipes, single-finger horizontal and vertical scrolling etc.

The wireless mouse has an impressive four-month battery life, and is available today for $69. Apple is marching toward a future devoid of buttons entirely. In case this mouse doesn’t make that clear.