Posted in Flash Memory,Toys,USB by Darrin Olson on September 22nd, 2007 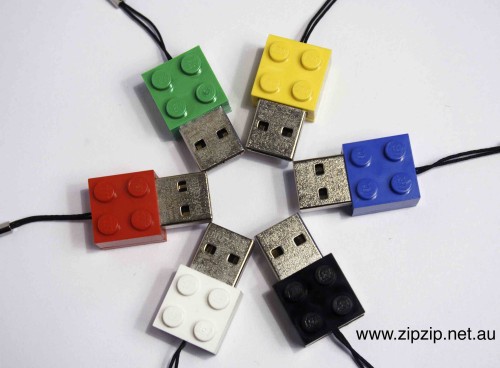 Zip Zip Memory Bricks are small USB 2.0 Flash memory drives encased inside a Lego-type toy building brick. When the cap is on they appear like a normal toy brick, but pulling one half of the brick apart exposes the USB 2.0 connector. They come in colors of green, yellow, blue, red, black or white, much like Lego bricks do, and have a capacity of 1GB.

The Memory Bricks also have a lanyard attached to make them harder to lose and easier to identify should you happen to drop it into a pile of regular toy bricks. The company says you can stack memory bricks just like you would with regular toy bricks, but what would be cooler is if the memory would stack up as well!