Posted in Automotive by Conner Flynn on February 3rd, 2009 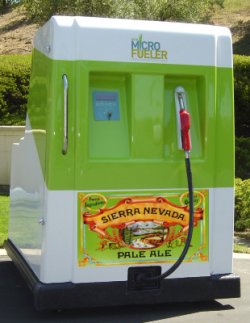 Beer fueling cars? Cars now competing for beer that you should be guzzling? Yep. And your car won’t get a beer gut or wake up next to Quasimodo the next morning. Don’t sweat it though, we’re talking leftovers. Sierra Nevada has purchased a MicroFueler, which produces ethanol from water, sugar and yeast. As you probably know from Beer 101, yeast is a major byproduct of beer fermentation. So they can now make fuel out of beer leftovers.

It’s a great Earth friendly way to recycle waste. And it’s nice to see a company being responsible and doing something good. Plus their cars get to drink beer. How cool is that? Your job doesn’t put beer in your car.