Posted in iPod Accessories,music by Conner Flynn on November 20th, 2007 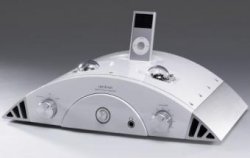 Whoever Lars and Ivan are, one thing is clear. Well, two things. They know design and they sound like a swedish/Russian adventure movie duo. This PA-40Ti Hybrid iPod Dock is a true work of art, resembling something like a techno hammerhead shark or manta ray from some far off future. It looks as if it may even eat the iPod.(In a cool way) They even left the tubes exposed so you can see them.

They’ve skipped the built-in speakers entirely and instead focus on giving you 40 watts of stereo amplification that can power your speakers.