Posted in Nokia by Conner Flynn on April 9th, 2008 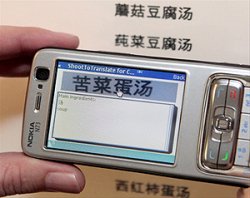 Nokia recently showcased a cool new app for Nokia mobile phones. The app is named shoot-to-translate and it translates from Chinese to English by taking a photo of the Chinese text that you want to read. This is super handy for those frequent travellers who have no idea how to read the local language.

You won’t have to worry about flipping through some translation book. You’ll know quickly what it says. Though the application shows only Chinese to English translation, we are obviously going to see the ability to do more languages in the future.